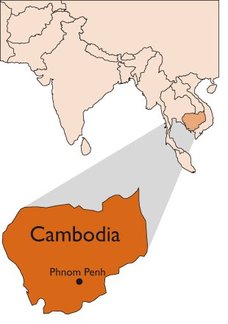 During the last 35 years Cambodia has been plagued by civil wars and changes in political leadership. Most notably, Pol Pot and the Kmher Rouge, who killed approximately 2 million or 20% of the population in the 1970's. Today, Cambodia remains the country with the third most land-mines in the world.

As a result of the genocide, 37% of Cambodians are under age 15. With so few adults available to work, child labor has become a serious issue. This is especially true in the rural areas where children commonly work long hours alongside their parents in the rice fields.

*Information and Map from www.worldvision.org